January 23, 2012 Leave a comment
Brrrrrr it’s cold outside! Up until a week ago, the weather in NJ has been pretty mild. But alas, old man winter has arrived and brought with him a little snow storm. We only got about an inch and a half but as usual, any snow storm no matter how small causes delays and cancellations.
I was a little bummed this morning because my Zumba class got cancelled due to the weather.  Bummed because I couldn’t exercise? Yes I really was! I have only attended 5 classes and have had an absolute blast at each one that I can’t wait to go to the next. It is a fabulous way to burn calories and have fun at the same time. Today, my Zumba instructor going to have two back to back classes and my grandiose plan was to take both. Yes, I planned to Zumba for two hours but alas, it snowed.
Not being one to let the weather keep me back, I decided to do some house cleaning which for me involves a lot of music. I put on some music, cranked the volume up and got to work putting my newly acquired dance moves into practice as I cleaned. Two and a half hours later I had burned some serious calories and had a spick and span house. Not too shabby if I do say so myself!
After burning all those calories, I had to refuel with a good meal. I contemplated ordering brown stew chicken from one of the West Indian restaurants in my area but since I had all the ingredients on hand, I figured I might as well make it myself. I made a quick salad to satisfy my hunger and started preparing the chicken. 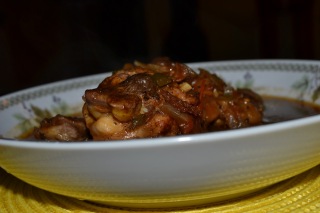 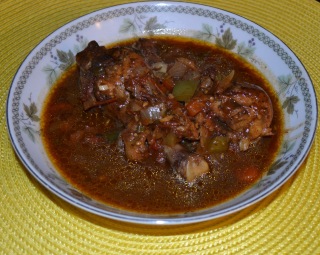 Directions
Squeeze lemon over chicken and mix well. After 5 – 10 minutes, rinse chicken and drain off excess water
Combine salt, pepper, tomatoes, scallion, onion, garlic, hot pepper, red pepper, green pepper, and thyme in a large bowl with the chicken pieces. Cover and let marinade in the fridge for 1 – 4 hours
Heat oil in a dutch oven or saucepan large enough for making stews
Remove the chicken pieces from the marinade and scrape off the vegetables. Reserve the marinade
Brown the chicken a few pieces at a time in very hot oil. Place browned chicken pieces on a plate to rest while you brown the remaining pieces
Drain off excess oil and leave enough in the pot to sauté the marinade. Add the marinade and tomatoes to the pot and sauté for 3 – 5 minutes
Add the water or chicken stock, soy sauce and browning and bring to a slow boil
Stir the water/flour mixture into the stew, add the chicken, carrots and potatoes if using them and lower heat
Let simmer for about 20 minutes
Serve with rice (white or brown) or rice and peas 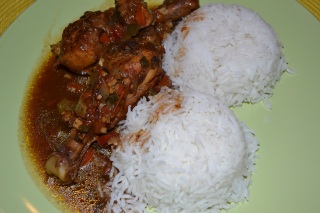