June 17, 2012 Leave a comment
I was in Toronto at the end of May visiting my wonderful sister and lovely nieces :). Upon arrival I was greeted by this:

Yum! I was thrilled, I love bakes stuffed with saltfish. I must have devoured three in one sitting. I have never attempted to make these let alone regular bakes. Luckily for me my sister was making another batch for a friend so of course I took the opportunity to observe and ask questions.
Fast forward to three weeks later when I finally attempted to make this all-time Guyanese breakfast favorite. I was adventurous. Instead of making regular bakes first to make sure I had the recipe and technique down my first attempt was to make the bakes stuffed with saltfish just like my big sis. It was an epic FAIL!  The bakes sank to the bottom of the pan and stayed there. SMH, I forgot one very important ingredient, baking powder!
Not being one to give up so easily, I tried the recipe again. This time I was sure to use baking powder and just make plain bakes. I am pleased to say that round two was a success. They came out light and fluffy
Ingredients
(Makes about 10 – 12)
2 cups flour
2 tsp baking powder
Pinch of salt
3 Tbs margarine/butter
1 heaped Tbs sugar

1 egg
Water (about 3/4 cup)
Oil for deep frying
Directions
Sift flour, baking powder, sugar and salt into a large bowl
Cut butter/margarine into small chunks and rub into the flour mixture until it resembles breadcrumbs
Add egg and mix
Add water to make a soft dough. Knead lightly for about 2 – 3 minutes
Cover dough and set aside for about 30 minutes
On floured surface roll out dough with rolling pin to about ½ an inch thick
Flour the top of a large drinking glass and use glass to cut circles in the dough (if you would like larger bakes, use rolling pin to roll out the portions a bit more- don’t make too thin) 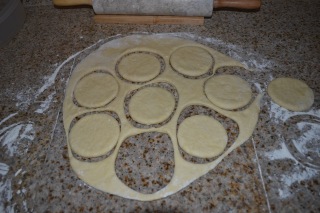 Heat oil
Once oil is hot fry bakes until golden brown (about 2 ½ minutes on each side). The dough initially sinks then rises to the top. Use a large spoon and scoop hot oil over the top of the bakes as they fry
Remove bakes and drain on paper towels
Best served hot with sautéed salt fish or sautéed smoked herring

Thanks for stopping by J! Before you’re on to the next one leave a comment below and connect with me on Twitter and Facebook. One Love – SapBrown.